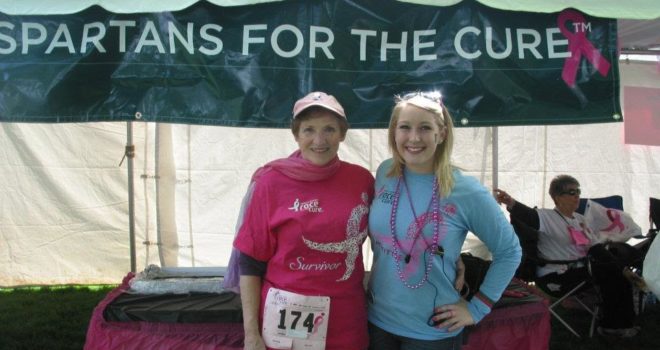 On July 1, 1967, I turned 30 years old. I remember a few months later, the night of Friday, September 22nd like it was yesterday. As I took off my bra before bed, I noticed a “thickness” in my left breast that I had never felt before. Self-exams were a new thing back then, and women were just beginning to talk about how they might be significant in finding breast cancer early.  In fact, I had just purchased a Red-Book magazine earlier that day, in which there was a section on women’s diseases, but I had skipped the section on breast cancer because I found it scary and couldn’t bear to read about it.

After finding the unusual spot, I immediately went to find the magazine and read the complete section on breast cancer.  I remember thinking that if this really was breast cancer, I was absolutely going to die.  Needless to say, there was no sleeping that night.

I called the doctor’s office at 7:00 am the next morning and left a message with the live-person answering service.  The woman must have known I was scared to death and relayed my message quickly, as the doctor called me back immediately and told me to come in right away.  The dear doctor who saw me never stopped smiling and reassuringly told me he didn’t think it was anything to worry about – it was likely just a cyst.  Even so, he went on to say that the surgeon is at the hospital and he wanted me to go see him in the ER that day.

The surgeon was waiting for me when I arrived.  He did an examination, and again, I was told it was just a cyst. When he tried to aspirate it, there was no fluid, so he said to come back a few days later to discuss removing it.   I was visibly upset and when he asked me why I explained that my grandmother died from breast cancer and I was so scared. He understood that I didn’t want to wait, and he agreed to remove it right away to make me feel better.  I was admitted to the hospital the next day and I breathed a sigh of relief, although my husband and I had to scramble to find someone to watch our three kids, ages 5, 8 and 10, for a couple of days.

I was admitted to Crittenton Hospital in Rochester, MI, which had only been open for about 3 months at the time, and surgery was scheduled for the next morning.  The surgeon assured me that it wouldn’t take long to remove the cyst and I would just be sore for a few days. The next morning I was wheeled down the hall on a gurney, wearing a funny little hat, feeling hopeful and dopey.  My husband and sister-in-law waited in the waiting-room, and after 4 hours they were anxious and knew something was wrong.

When I finally woke up, I was in intense pain.  I reached for my left breast and it wasn’t there.  It was completely gone.  The surgeon told us that it wasn’t a cyst, but a malignant tumor.  I was devastated.  I had no time to mull this information over; no clue that I was going to lose my entire breast in surgery.  Not only was I missing my left breast, but everything around it too. In 1967, the only procedure for breast cancer was a radical mastectomy, and the surgeon removed all of the tissue and muscle from under my clavicle, down to the bottom of my ribcage, and under my arm.  I could knock on my bones and I couldn’t raise my left arm.  When I was wheeled down that hall wearing my funny little hat, I had no idea what I was in for.

I ended up spending 12 days in the hospital and I cried for the entire 12 days. I was sad, mad, scared, confused and even in denial that it was real.  I had no one to talk to about what happened and did not know anyone who had breast cancer that survived.  I only knew of older women who were diagnosed, and they all lost their battles.  I could not even fathom someone else having breast cancer at 30 years old, or losing their breast at 30, let alone that I would live it myself.

Since I had the radical mastectomy, I was at least spared having to undergo chemotherapy or radiation treatment.  When I was released from the hospital, the nurses all hugged me goodbye and wished me well.  I saw one of the nurses about 10 years later and she still remembered me.  I was one of the first mastectomy patients ever at Crittenton.

I went home with drains, dressings and pain medications, but I was grateful to be home with my family.  Many friends came to visit, and they were all so kind and thoughtful, but everyone was shocked.  I was so young.  I continued to cry for a long time and for some reason I felt like the surgeon lied to me and I was too young to actually have had breast cancer.

Sixteen years later I attempted to undergo reconstruction surgery. I had to order my medical records for the doctor and I returned to Crittenton to pick them up.  When I opened the lab report that confirmed the positive findings, even all those years later, I sank to the floor in the middle of the hospital hallway and cried all over again.  After 12 attempts at reconstructive surgery, I finally gave up.  With so little skin and muscle to work with, there was no way to ever have it look normal.

It took quite a while for me to accept my body after the surgery, but I know I would rather be alive and without my breast than the alternative.  Fortunately now, there are several methods for detection, but I am convinced that self-exams and annuals are the most powerful tools for early detection at any age.  In 1967, there was no talk of mammograms, not even with a family history.

I also believe that although it was traumatizing, the radical mastectomy helped save my life.  I know it is not anyone’s first choice, but it guaranteed that nothing was missed.  These tools kept me alive all of these years and I encourage young women to follow up early with their doctors and do self-exams long before their scheduled mammograms.  My daughter, Susan, was diagnosed when she was just 39 years old and lost her battle at 47.  I lost my daughter, my best friend, because she was denied the same speedy response to her concerns that I was thankfully given.  Do not be afraid to go for second and third opinions and to tell your doctor you want it out immediately, regardless if it’s “just a cyst.”

My granddaughter started her annuals at 24 years old and although she knows our story, she wanted me to share it with all of you and pass along this wisdom we have learned the hardest way.  I love this girl with all my heart and these tools allowed me to watch her grow and join her in advocating and fundraising to beat this disease once and for all.  I can now say that I am a 50-year breast cancer survivor, and I am grateful for every day of my life.  Thank you God!